It’s been a crazy month for Mixcloud, we’ve been travelling, coding, launching, interviewing, partying, and collecting air miles non-stop. We’re now back in big London city, so we thought we’d give you an update.

First up came the legendary Big Apple, and the big coding rush to finish the final features of the site in time for the private beta launch. Between late nights on the computer we managed to catch an NY Tech meetup, Katz diner, a meeting with the guys at TargetSpot, dinner n drinks in K(orea) town, a trip to Studio B to see the Fools Gold family, a meal consisting exclusively of Russian dumplings in deep Brooklyn with Mr Anthony Hypem, and at least one visit to Central Park. Somehow, we managed to finish all the coding (database collation bugs included!) and got the site live 5 days before heading to Texas. The private beta is now live, and we have 50 invites exclusively for the readers of this blog, use the code “blogcloud”

Next up was Austin for “Southby”. I’ve never seen so many iphones in close proximity. I think AT&T hadn’t either. Panels, talks, networking, barbeques, interviews, free beer, pool parties, twitter parties, live bands, DJs and a Mixcloud guerilla sticker campaign – that was day one. The rest of the week just got busier, and was spent on very little sleep and many jokes about how “mobile” was the word of the moment, even if most people swallowed half the vowels. MOBL.

Oh and we got on the BBC news front page.

Yep, a screenshot of our humble little startup was the featured article link on the front page entitled “UK firms flying the Tech flag”. You can still catch the article, and a great video with Nikhil (where you can just about see his computer screen) here:

We were blown away with the honour, and proceeded to contact all our family and friends. Thanks for all the kind words!

The whole team was out in force: Nikhil “gottobase1” Shah, Matt “dj flash” Rawson, Alex “thankyouverymuch” Churchill, Matt “shortshorts” Clayton, Sam “wasthereinspirit” Cooke, and myself – Nico “MOBL” Perez.  We did our best to represent Mixcloud (and the UK) in style, from the obligatory card swapping sessions to the not-so obligatory dance-offs.

Final stop on the tour was the Miami Winter music conference. The street soundtrack changed from up n coming indie rock bands, to house (deep house, progressive house, funky house, blog house, mouse house, ..). Less iphones, more silicon of another variety was present. More meetings with DJs, agents, promoters, label owners and bunch of good people in between trips to the beach. The feedback on the site was amazing, we’re really happy with the reaction people have when we present it to them. Look out for some big names on Mixcloud coming soon! 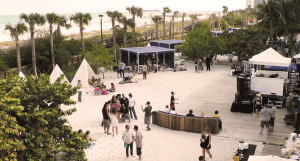 We’d like to say a quick thanks to Malika, Christine, Anthony, the Digital Mission Team, Darren Waters, Pete, Andrew K, Jarret Myers, and everyone else who we met up with in the States.